California…Have You Lost Your Minds?

What Are Your Churches Teaching You? Do you know nothing about the Inspired Holy Scriptures? Have your religions been teaching you to hate children, or do you just hate everyone? Have you ever heard the phrase “Love Your Neighbor” or, help them that ask of you? Have you never read the Words of the Savior, Yahshua Messiah?

30 Give to everyone who asks of you; and from him who takes away your possessions, do not ask for them back.

31 And just as you would have men do to you, do also the same to them only.

38 Give, and it will be given to you; full measure, pressed down, shaken together, and running over, will be poured into the lap of your garment. For with the same measure you use, it will be the standard which will be measured to you.

Give to help these children and their families who are asking the U.S. for help and you will be taking a step in the Teachings of the Savior, Yahshua Messiah. Make signs that say Welcome!, We Love You!, We Will Help!, You Came To The Right Place, and Love Starts Here! This is pleasing in Yahweh’s sight. Notice the Words of Yahshua Messiah’s Apostle.

22 And whatever we ask, we receive from Him, because we keep His Laws and do those things that are pleasing in His sight.

23 And this is His Commandment: That we should believe on the Name of His Son, Yahshua Messiah, and love one another, as He also gave us Commandment.

California is suffering from extreme drought at this time. Surely, it has the attention of at least the majority of the residents of that golden state by now. Are your preachers praying for rain? Yes? How many years? Are those prayers being answered? How many inches of rain were requested? By asking for a certain amount of rain, you can find out if the request was answered, or was it an amount that would have come anyway? If you ask for a certain amount and don’t get that amount, you will know that your preacher is not being heard? If not, for certain, you may want to start searching for someone who can produce or at least explain why. If he is not heard, are you still looking to him for other things? Bad idea? Think about it!

And many false prophets will rise, and will deceive the many.

3 For the time will come when they will not endure sound doctrine; but after their own lusts they will heap to themselves teachers, who will tickle their ears; telling them what they want to hear.

4 And they will turn away their ears from the Truth, and will be turned to fables.

In verse 3, who are they? This is speaking of deception–iniquity–being chosen because of their own lust, leading to sin. Could you be one of the “they” spoken of in verse 3? If so, you may never get another opportunity for Salvation. Compare:

And because iniquity will abound, the love of the many will grow cold.

What would cause a person to lose their affection? Just that, the practice of iniquity. Iniquity is doing away with the Laws of Righteousness, which was prophesied in:

And he will speak great words against Yahweh, and will wear out; mentally attack to cause to fall away, the Saints of Yahweh, and think to change times; Yahweh’s Feast Days, and Laws; and they will be given into his hand until a time, and times, and the dividing of time.

Iniquity is also teaching that the Laws of Righteousness were done away with, causing or teaching the world to lust and fulfill their illegal lusts by practicing sin. Both sin and iniquity cut one off; that is, separate them from Yahweh, the Creator. Yahshua Messiah shows that many will be deceived by following their own lust, instead of following the Inspired Words written by the Prophets of Yahweh.

Because straight is the gate, and narrow is the way which leads to Life, and few there are who find it.

Notice, few there are that will practice Righteousness; but evil, the many will follow.

Enter in through the narrow gate; for wide is the gate and broad is the way that leads to destruction, and many are those who go that way.

Many will follow the way of destruction. Destruction? Compare a Prophecy for this generation.

7 For nation will rise against nation, and kingdom against kingdom, and there will be famines, and pestilences; disease epidemics, and earthquakes; environmental disasters, in place after place:

11 And many false prophets will rise, and will deceive the many.

12 And because iniquity will abound, the love of the many will grow cold.

Iniquity abounds in all of these religious imposters teaching against Yahweh’s Laws of Righteousness and Love, and spreading hatred among the nations as we see in verse 7. Nation will rise against nation and kingdom against kingdom. Notice what neglecting Righteousness brings.

21 For then will be Great Tribulation, such as has not come to pass since the beginning of the world to this time—no, nor ever will be.

29 Immediately, but after the Great Tribulation of those days will the sun be darkened, and the moon will not give her light, and the stars will fall from heaven, and the powers of the heavens will be shaken.

32 Now learn a parable from the fig tree: When its branch becomes tender and puts out leaves, you know that summer is near.

33 In the same way, when you see all these things, know that His coming and The End of the Ages are near, at the very door.

34 Truly I say to you: That generation will not pass away, until all these things are fulfilled.

Did you notice that everything shown in this chapter is seen today? When you see these things (verse 33)… That generation (verse 34)… We are in the Last Generation now, at the time of this writing. How far are we into the Last Generation? Answer: near the end.

Ask for our information on the Prophecies on knowledge will be increased, the nuclear bomb patented, the computer patented, the last of the Two Witnesses being born; all of these took place in 1934. It won’t be another time period. It’s this generation, and we are in the end when nuclear wars are about to take place.

You are showing the essence of the fulfillment of Mattithyah 24:12…cold love against children who are crying out for help. Change your signs to what you see below: 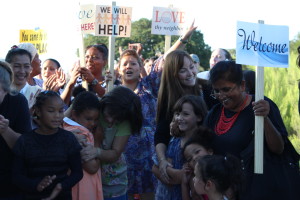 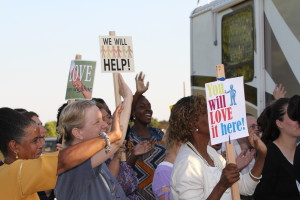 From you has come sodomy into every home; sodomy which brings forth disease epidemics such as AIDS. From you came the exploitation of women’s bodies and the teaching that everyone should participate in fornication, adultery, homosexuality, and bestiality, which adds to the mutation and spread of HIV-AIDS and thousands of other STDs. STDs cause other diseases, such as those that attack the organs of the body, causing death. Dying you will die (Genesis 2:17). From you the profaneness of sodomy is taught and accepted in homes, schools, churches, the courts of America, even the ‘supreme’ court of America. From you come the murders of billions of babies, making their body parts merchandise. Yes, all of these things are coming from your state. Should Yahweh allow your cities to survive?

You are showing the entire world just how evil the ‘golden state’ can be. You are showing how much hatred there can be for another people. You stand with hateful signs in your hands and paid force like the pharisees, sadducees, essenes, and herodians did with the roman catholic army. When will you start hanging them on the stake again? When will you start demanding that the children be thrown in the lions den again? Just how far do you intend to take your hatred, your cold love (Mattithyah 24:12)?

The sentencing Judgment and the opening of the gates of hell begin at the end of this present, prophesied generation. Read it for yourself.

11 And I saw a Great White Throne, and Him Who sat on it, from Whose Face the powers of the earth and the powers of the heavens, including the Gods (elohim), were driven away; for the verdict was reached that there is no place for them.

12 And I saw the dead, small and great, standing before Yahweh. And the books were opened; and another book was opened, which is The Book of Life. And the dead were judged out of those things which were written in the books, according to their works.

14 And death and sheol were cast into the lake of fire. This is the second death.

15 And whoever was not found written in The Book of Life was cast into the lake of fire.

4 Whoever commits sin, transgresses also the Laws; for sin is the transgression of the Laws.

7 Little children, let no man deceive you; he who practices Righteousness is Righteous, just as He is Righteous.

8 He who commits sin is of the devil, for the devil has sinned from the beginning. For this purpose the Son of Yahweh was manifested; that He might destroy the works of the devil.

10 In this the Children of Yahweh and the children of the devil are manifest. Whoever does not practice Righteousness is not of Yahweh, and he does not love his neighbor!

Is there anyone in California that is written in the Lamb’s Book of Life? Is there any repentance in the state? Why should Yahweh spare you from the plagues? Why should your dry parched land ever be given rain again? You are as much to blame as the roman catholic church for what is coming next.

1 Before Yahweh’s very Eyes, the earth is made empty and it is made waste; the face of it is perverted and its inhabitants scattered abroad;

3 The land will be utterly emptied and utterly plundered, for it has come to pass that this Judgment has been pronounced.

5 The earth also is defiled under the inhabitants of it, because they have transgressed the Laws, changed the Ordinance, and broken the Everlasting Covenant.

6 Because of this, the curse has devoured the earth, and they who dwell therein are desolate; therefore, the inhabitants of the earth are burned, and few men left.

18 And it will come to pass, that he who flees from the noise of the fear will fall into the pit; and he who comes up from the midst of the pit will be caught in the snare; for the windows from on high are open, and the foundations of the earth are shaken.

20 The earth will reel to and fro like a drunkard, and will sway like a hut. The transgression in it will be heavy upon it; it will fall, and not rise again.

Acts 3:19 is your only hope. The plagues of nuclear wars will not wait. You need to repent now.

For, behold, the day comes that will burn like an oven; and all the proud, yes, and all who do wickedly, will be stubble—the day that comes will burn them up, says Father Yahweh; and it will leave them neither root nor branch.

The hatred you are showing for these begging children is only one of the many evils you now carry in your heart that shows on your face. You will stop condemning and refusing help to children one way or another. The condemnation of children crying for help is too much hatred to show.

Join us in helping these children. We have a way. Call, write, or email us to find out how.