Those are marvelous Prophecies that were written around 96 AY (After Yahshua) by a man named Yahchanan, who was a Disciple of Yahshua Messiah.

If you are wondering:

Call, write or email us because we answer all Scriptural questions. Our phone lines are open 24-7. We may not be readily available when you call, but we will certainly get back to you with Scriptural facts if you leave us your contact information along with your question.

In a Fourth Part

The Book of Revelation was written 96 AY. We are now in 2018 AY. That Prophecy was written 1,922 years before I wrote this letter showing the world that they should trust the Scriptural Prophecies and get prepared.

At this time, there are wars raging in the following areas: 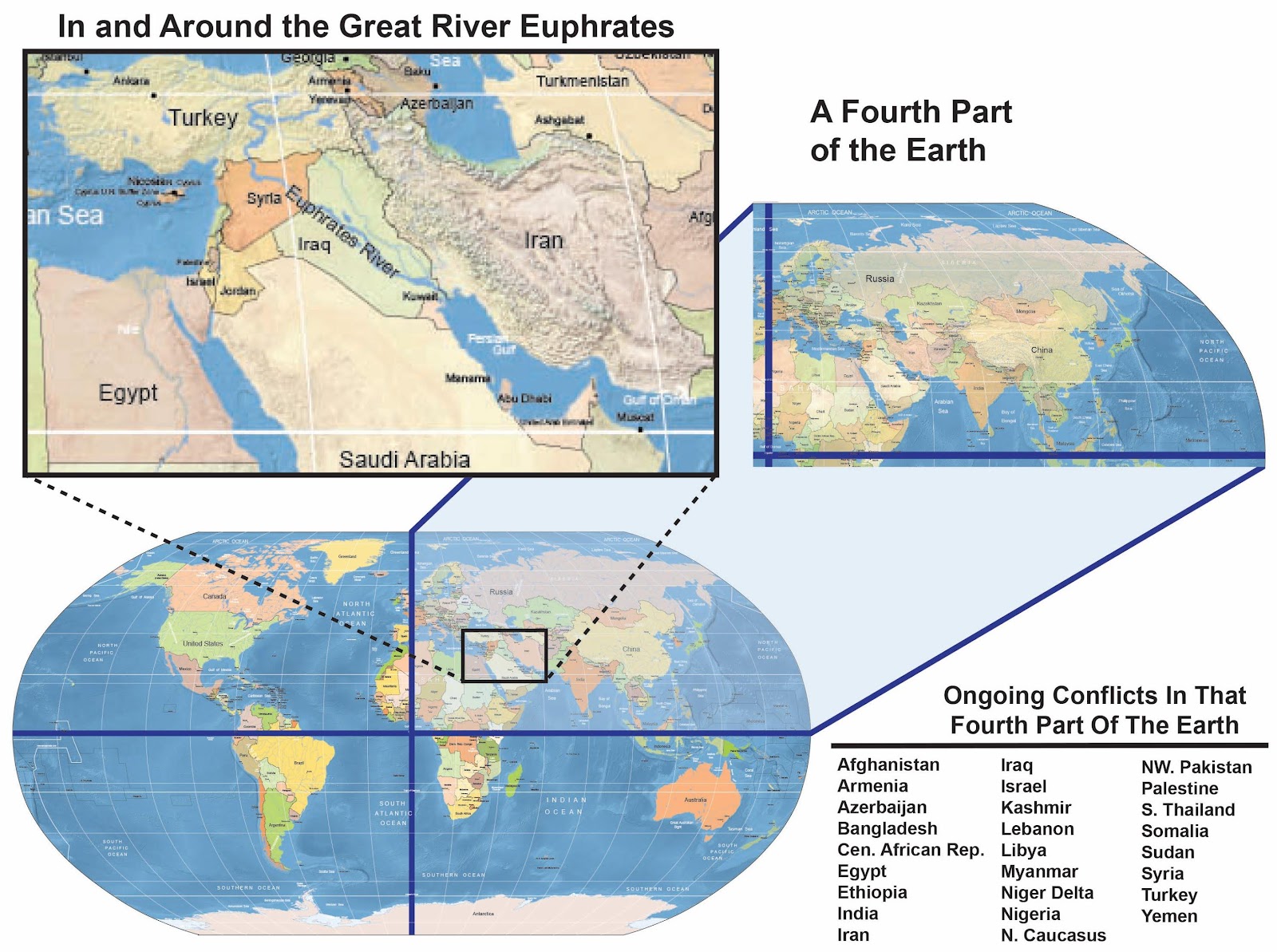 Now, look at the Sacred Scriptures from The Book of Yahweh.

13 And the Last Malak sounded, and I heard a voice from the four horns of the golden altar which is before Yahweh,

14 Saying to the Last Malak which had the trumpet: Loose the four messengers who are bound for the great River Euphrates!

15 And the four messengers were loosed, which were prepared for an hour, and a day, and a moon; month, and a year, in order to slay the third part of men.

Verse 13: The four horns of the golden altar, given to Yahweh’s Servant Mosheh to show the slaughter that sin brings, where the slaughtering would start and how long it would continue, which is around the Euphrates River location.

Revelation Chapter 6 shows the location is in that fourth part of the earth.

6 And I heard a voice in the midst of the four living creatures, saying: A measure of wheat for a penny, and three measures of barley for a penny; and see you do not hurt the oil and the wine.

7 And when He had opened the fourth seal, I heard the voice of the fourth living creature say: Come and see.

8 And I looked, and behold, a pale horse. And the name of him who sat upon it was death; and sheol; the grave, followed with him. And power was given to them over a fourth part of the earth, to kill with sword, and with hunger, and with pestilence—the same under the authority of the beast of the earth.

Verse 8 shows a fourth part of the earth.

Saying to the Last Malak which had the trumpet: Loose the four messengers who are bound for the great River Euphrates!

Revelation 9:14 shows us that fourth part of the earth is the part that is home to the great River Euphrates.

If you have watched the world news in the last few years, you know that wars are raging in that fourth part of the earth.

Revelation 9:15 actually shows that a third part of men will be slain in that fourth part of the earth.

And the four messengers were loosed, which were prepared for an hour, and a day, and a moon; month, and a year, in order to slay the third part of men.

18 By these three were the third part of men killed: by the fire, and by the smoke, and by the brimstone, which issued out of their mouths.

Revelation 9:17-18 show the industrialization that began in this generation with the increase in knowledge, which is shown in other Prophecies.

The following books give details of the prophesied timetable for the wars in that area: The Mark of the Beast, Volumes 1 and 2; The End; and Birth of the Nuclear Baby. The transcribed sermon series, The Prophecies For the Middle East Gulf War, given in 1991, can be found in The Seventh Book of Yisrayl, Part 2.

Call, write, or email us for further information.

Remember the Seventh Day Sabbath. Join us weekly for live stream at Facebook live or Yahweh.com.